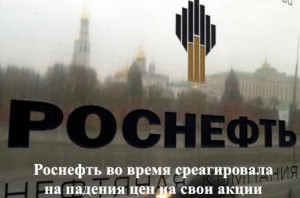 19 of March. Igor Sechin (head of Rosneft) announced that the company bought their shares on the market. He also said that businessmen should always be able to benefit from any situation.

Recall that a stock value "Rosneft" has fallen in connection with the current Ukraine situation. Rosneft took advantage of this by buying out their shares. The company expects that the investment in the campaign paid for itself. Sechin also underlined that his company is not worried about the situation in Ukraine, he is confident that the current state of Affairs, which we can see in Ukraine, can not last long.

The number of Treasury shares was not disclosed.

Earlier, Sechin said that meant to him personally threatening sanctions from the Western community, he plans to buy the company's shares. To acquire the shares he intends to own money, placed in Russian banks, or borrowed.

Together with Sechin, the company's shares were acquired by another six top managers of "Rosneft". The shares have gained Vice-President and member of the management Board Larisa Calanda, spending on the purchase of shares of $3.7 million (package of its shares rose from of 0.0118% to 0,0168%). Also acquired the shares of "Rosneft" Vice – President Yuri Kalinin, spending on purchase of $75 thousand Didier Casimiro (member of the Board of "Rosneft") became the owner of shares in the amount of 0,0011%, while spending $816 thousand Pyotr Lazarev also not left behind, he increased his stake to 0,0027% (an increase of 0.0016%), spent $1.18 million Igor Pavlov (member of the Board) spent on the purchase of shares of $741.8 for thousand, increasing its stake to is 0.0010%.

At the end of 2013 Sechin officially stated that to increase his stake, he has no plans.