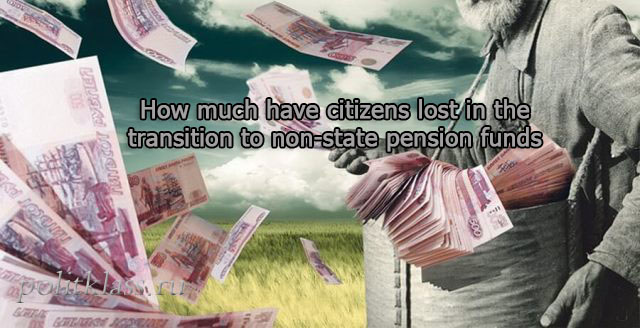 22 Feb. VEB estimated the losses of Russians in the transition from the Pension Fund of Russia (PFR) to non-state pension funds (NPF) in 10 billion rubles.

"The loss of citizens in the transition from the FIU to the NPF, ceteris paribus may be at least 10 billion rubles." - said in the materials of VEB.

Also, VEB noted that in 2017, during the transition from the FIU to the NPF, the Russians lost 33.9 billion rubles of investment income. In this regard, VEB transferred RUB 191 billion from its market portfolio and RUB 2.55 billion from the government securities portfolio to the NPF. In total, about 2.85 million people moved to the NPF.

Why investment income is lost

Early transfer of pension savings may result in the loss of the entire investment income accumulated since 2015. The fact is that in 2015, a law was adopted, according to which, early transfer of pension savings (from the pension Fund to the NPF, from one NPF to another or back to the pension Fund) without loss of investment income is possible only once in 5 years (respectively, for most painlessly implement this procedure will be possible only in 2020). The same citizens who decided to transfer their funds from the FIU to the NPF will lose their investment income from 2016.

Do not lose their income only those who transferred their savings in 2014, but according to the FIU such only 1.5%.

Investment income, which is lost by insured citizens, remains with NPF or FIU, depending on where the savings were originally. According to the accounts chamber, in the period from 2015 to 2017, the Russians who prematurely transferred their pension savings from the pension Fund to the NPF or from one NPF to another or back to the pension Fund, lost more than 82 billion rubles. and the loss of income of one person could reach 500 thousand rubles.

The problem of loss of investment income has led to the fact that Russia has adopted a law on mandatory informing citizens about the possible loss of income when transferring pension savings. However, this rule came into force only on January 1, 2019 and was not mandatory during the transition campaign of 2018.

The funds of the insured persons who have declared the transfer of pension savings must be transferred to the NPF and management companies before March 31, 2019.

For the first half of 2018, the average yield of NPF from investing pension savings of citizens amounted to 5.4% per annum. For the whole of 2018, there are no official data yet. It is only known that part of the large NPFs associated with FG" Future "and Bank" OTKRITIE " for 9 months showed a negative return due to the revaluation of investments.

In 2017, according to the Central Bank, the weighted average yield of NPFs was 4.6% due to the loss of a number of funds against the background of Bank reorganization. The yield of pension savings from VEB in 2017 for the expanded portfolio was 8.59% per annum, for the portfolios of government securities – 11.1%. In the first quarter of 2018, the yield was 6.4% and 9%, respectively.