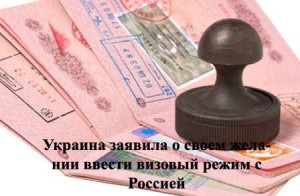 19 of March. NSDC (national security Council and defense of Ukraine) has decided to introduce visa regime with Russia. Andriy Parubiy (acting Secretary of the NSDC) stated this at a briefing.
He stated that he instructed to introduce a visa regime was given to the MFA of Ukraine. He also said that the Cabinet of Ministers of Ukraine it was proposed to ask the UN to proclaim Crimea a demilitarised zone and take measures for the removal of Russian troops from the territory.
Also Andriy Parubiy added that the Cabinet proposed to develop the ways of evacuating the civilian population from the territory of Crimea, which will show their unwillingness to stay in the area.
All of the decisions of the security Council was preceded by the introduction of Vladimir Putin on the ratification by the State Duma of the Treaty on the accession of Crimea to the Russian Federation and the draft Federal constitutional law on the creation of new subjects of the Federation.
Recall that on 18 March in the Kremlin Vladimir Putin (the Russian President), Sergey Aksyonov (Prime Minister of the Republic of Crimea), Alexei Chaliy (mayor of Sebastopol), Vladimir Konstantinov (Chairman of the state Council Republic of Crimea) signed the Treaty of accession of the Republic of the Crimea and city of Sevastopol into the Russian Federation.
The mobilisation continues
The interior Ministry, the defense Ministry and the security Service of Ukraine was instructed to continue partial mobilization of troops and to lead all the armed forces in full combat readiness. Also these agencies have been instructed to complete the deployment of tactical groups in the border areas.
At the last meeting of the NSDC adopted a decision to withdraw Ukraine from CIS countries.
Ukraine vs. Russia: how far all this can go
March 17 on the initiative of Oleh Lyashko in the Secretariat of the Verkhovna Rada of Ukraine a bill was introduced about the severance of all diplomatic relations with Russia, the denunciation of Russian-Ukrainian treaties and the application for membership in NATO and the EU.
This document also contains the requirement to declare a full combat readiness of all the armed forces of Ukraine, to mobilize the population and create militia units. In this document there is a proposal to refer to the countries included in NATO, and, including, to the U.S. to provide Ukraine with maximum material and technical assistance in the form of equipment, ammunition.
Recall that the participants of the March 6 emergency EU summit decided to freeze consideration of easing visa regime with Russia and a new partnership agreement.