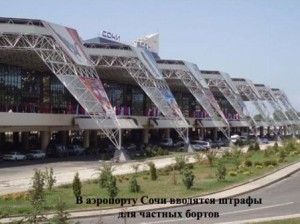 Fines are imposed for violation schedule of flights during the Olympic games. Sanctions will not apply if delay is caused by weather conditions or emergency situations of technogenic or natural character.
Such measures are caused by high intensity of flights during the games. These measures are primarily aimed at improving the discipline of business aviation flights, as well as for even load distribution on the airport during the mass departure and arrival of scheduled flights.

It is emphasized that sanctions will not be applied in case of occurrence of emergency situations of technogenic or natural character or because of adverse weather conditions at the airport of arrival or departure, and when technical failure of the vessel.

Sochi international airport received more than 600 applications for private flights before and after the opening of the Olympic games.

With the end of 2013 in Sochi has opened a new terminal that is capable of handling about 80 passengers per hour. During peak dates (February 4-8) is scheduled to serve 60 flights per day. It is expected that 4 to 7 February, the airport will host more than 200 international and domestic flights.