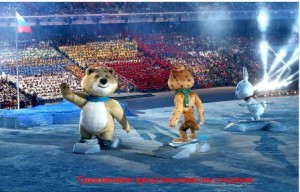 07 of february 2014 at 20:14 took place the opening ceremony of the winter Olympics. This ceremony was eagerly awaited by millions of people around the globe.

"Live" this ceremony was seen by 40 thousand. people, more than 3 billion people could see all the action on television screens.

The ceremony was truly gorgeous, no one remained indifferent after seeing. The organizers tried their best. Everything was at the highest level (which did not cease to mention the guests of the ceremony).

At the stadium "Fisht" and a big turnout from all regions of our country and foreign guests. They were all just in awe of everything they saw.

The team that will represent Russia at these Olympics, the largest number of participants. And what parties!

All who were able to see the event, were ecstatic and glowed with happiness. Many came to the stadium with children.

After the ceremony, the crowd was slow to disperse. Everyone wanted to be photographed with the Olympic flame on the background of the Olympic rings, the glowing stadiums. Many people on the questions of the journalists told me that they had long wanted to visit the Olympics, but it was not possible, because they were conducted in other countries. Here is an opportunity to have the Olympic games in Russia.

Olympics Sochi – 2014 – a Grand event that will long remain in the memory of the people. This event of international significance.