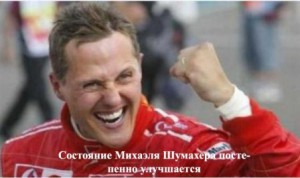 14 of April. The state of the famous racer "Formula-1" Michael Schumacher is gradually improving. This was announced by the Manager Schumacher Sabina Whom.

She said that any forecasts to give early. To predict further development of events can not even any doctor, as each case is individual and the body's response to the situation of each one.

However, Who stressed that Michael already periodically is conscious and responds to the reality surrounding him. This suggests that there is hope that Schumacher will recover soon.

We will remind that on December 29 2013 Michael Schumacher suffered a terrible injury while skiing on unprepared track. The racer has already had several operations in the best clinic of Grenoble. Schumacher about three and a half months, is in a state of artificial coma. From this state, the rider began to withdraw from about the end of January.