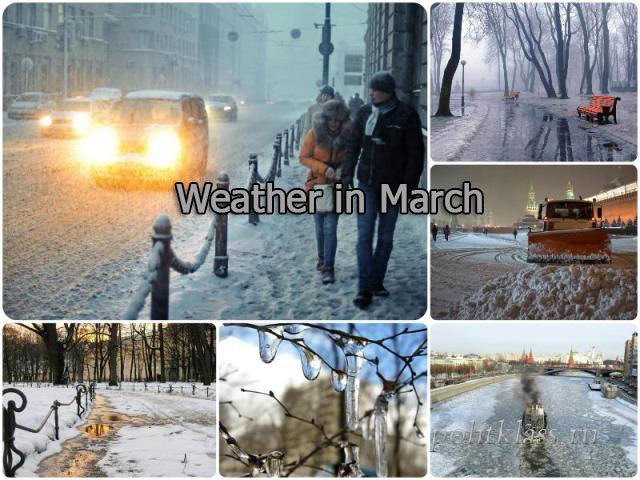 21 Feb. In most of the territory of Russia the weather in March will be within the norm, this is evidenced by the preliminary forecast made by the hydrometeorological center. However, what is considered the norm? Frost and snowfall for March-this is also the norm.

"If we talk in General about March, it will be within the norm", - said Galina Bryntseva head of the long - term weather forecasts Department of the far Eastern umms, told The political class correspondent. "This means that winter is not over yet."

March in the South of Russia

Weather in Rostov-on-don will also please residents. The weather will be dry and warm: day to +70C, night – to +40C. The monthly rainfall will be 38 mm.

In Pyatigorsk, the situation will be about the same. During the day the air warms up to + 80C, at night-up to + 40C.

The southern Volga region will enjoy this spring. In Astrakhan, the air temperature during the day will be about + 70C, at night- + 30C. The monthly norm of precipitation is 22.3 mm. according to forecasts, it will be rainy only one day.

In Volgograd, the air temperature during the day-50C, at night-30C. Monthly rainfall – 26 mm.

In the middle Volga region spring will not be so noticeable. In Naberezhnye Chelny the air will get warm only to -10C and the night – minus 50C. Rainfall is 30 mm.

In Kaliningrad, the air warms up to +50C during the day, at night - about 00C. Cloud cover will be 53.3%. The sun will please not often. The month will be dry. The rainfall rate will not exceed 26 mm.

In St. Petersburg, the average temperature will be: day: about 00C, at night-minus 40C. The days will be mostly cloudy. The rainfall is 27.8 mm.

In General, we can say that in the Western regions of Russia there will be timid signs of spring.

In the North-West, there will sometimes be precipitation in the form of wet snow.

The Northern regions of our vast country will remain in the grip of winter.

In Vorkuta average temperatures during the day will not exceed minus 110C, at night – minus 150C. The sky will be covered with thick clouds. Cloud cover will be 86.8%. Precipitation will be only three days. The rainfall is 50.2 mm.

In Norilsk will be about the same weather: the day the air warms up to – 150C, at night-minus 180C. Precipitation in the form of snow will be observed for about four days. The rainfall will be 48 mm.

March in the Urals and Siberia

Half a month in these regions will belong to winter. Nothing will hint at the approach of spring. The air temperature will be as follows:

March in the far East

The far Eastern region is a fairly large region, so it is difficult to talk about average indicators. In Blagoveshchensk, spring comes earlier than, for example, in Kamchatka. Therefore, let us dwell on each part of the region.

In Vladivostok in March, the air temperature during the day will be +20C, at night – minus 30C. The sky will be covered with clouds, clouds will be 39.6%. Precipitation will be a little: 22.7 mm.

In Petropavlovsk-Kamchatsky, the air warms up to minus 30C during the day and to minus 80C at night. Cloud cover will be 53.8%. Possible precipitation in the form of snow.

March in the Central region

In the Central region in the first half of March almost no approach of spring will be seen. In the first days of March, the snow will continue to lie. In the second week of March, the temperature will gradually increase, the snow will be replaced by rain, which will wash away the signs of winter. However, despite the increase in temperature, due to the constant winds of the Northern direction there will be no feeling of heat.

Average temperatures of some cities in the Central region

March in Moscow and Moscow region

The average daily air temperature will be about minus 20C, the average night temperature-minus 40C. Average humidity-73%.