Главная Economy The Bank “eurotrust”: a sequence of closed banks 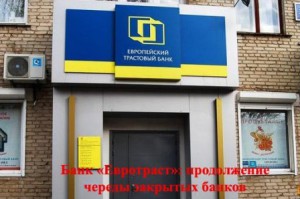 February 18, 2014. The Central Bank filed in the Arbitration court Declaration of acceptance of Bank "the eurotrust" bankrupt. Date of consideration of this statement is not appointed yet.
The license of European trust Bank was revoked on 11 February. The decision to revoke the license due to the fact that the Bank does not fulfill the requirements of the Federal laws that regulate banking activities of Bank of Russia. It was also found that "eurotrust" has provided dishonest or inaccurate reporting of data and is not able to meet all the demands of its creditors.

The Bank is not timely met its obligations to creditors and depositors. Conducting a risky credit policy, "the eurotrust" has not made adequate provisions for possible losses on assets and loans receivable, adequate to the risks

Bank "the eurotrust" in addition to the foregoing provided to the Bank of Russia false statements, which hid the facts of non-fulfillment of obligations to depositors and creditors. Also, the Bank was involved in dubious transactions in cashless and cash. The volume of such transactions for the three quarters of 2013 exceeded 7 billion rubles.

The management and owners of Bank have not taken measures to bring the Bank's activity to normal.

Bank "Evrotrast" was a member of the transfer system Migom. After the revocation of the license of the Bank, the system stopped giving money to its customers throughout the Russian Federation and in CIS countries.

"Eurotrust" participates in the Deposit insurance system. As of January 1, 2014 by total assets the Bank ranked 201-th place in the banking system of Russia. Total liabilities of the Bank "eurotrust" to individuals amounted to 3.7 billion roubles.