Главная World The clashes with the protesters in Thailand: there are victims 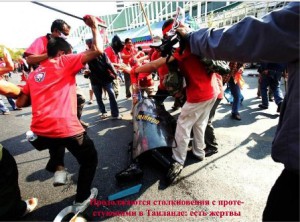 February 18, 2014. In the capital of Thailand in clashes with protesters injured two police officers, one killed.

Reuters reports that the police had to use tear gas to disperse demonstrators in the capital. Earlier, police arrested Somkiat Pongpaibul, one of the leaders NCDR (people's democratic reform Committee), organizations involved in the protests in the capital of Thailand – Bangkok. Somkiat was previously a member of Parliament of Thailand from the Democratic party.

Today, during the dispersal of protests at government buildings in the North and in the centre of the capital was detained around 100 protesters. The streets of Bangkok now patrolled about 15 thousand employees of law enforcement agencies.

Recall that the protests began in February. One of the main goals of the demonstrators – not to give Prime Minister Yingluck Shinawatra an opportunity to perform his official duties. After protests, Shinawatra is forced to perform his duties in the defense Ministry building. The police last Friday races was cleaning the space around the government building from the barricades, but the protesters again erected barricades.