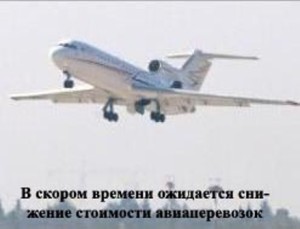 18 of February, 2014. The bill, which aims to reduce the cost of flights, has been approved by the government Commission on legislative activities. This project today appeared on the official website of legal information.
In the bill there are two types of tariffs: tariffs that take into account risks of failure passengers from the carriage, and the rates of such risks. The bill extends the capabilities of firms to choose the prices and conditions of carriage, creates conditions to reduce the cost of such transportation. Thus, the bill can improve the situation for about 92% of passengers. In this case the situation of passengers who refused the carriage, does not deteriorate, that is very important.

This bill proposes that passengers will be offered a choice of two strategies of behavior, of which he will be able to choose that which is most favorable. First strategy: to conclude the contract, thus, err in case, if he refuses from the trip – this strategy is relevant for those passengers who are not sure that you use your ticket. The second strategy: to purchase a ticket for a cheaper non refundable rate – this strategy is advantageous to those passengers who are sure to return the ticket back.

The passenger, knowing that can purchase a ticket, both returnable and non-refundable rate, will be able to make a choice based on their intentions. Also the passenger can get all the paid amount back in case of refusal of carriage. The bill provides that such a return is possible not only in case of purchase of ticket return rate, but with the purchase of a ticket for the non-refundable rate, in case of refusal of carriage due to illness of the passenger or a member of his family, next to him.

Non-return rates have long been used in international practice. Foreign companies, offering their services on the territory of Russia, using these rates to sell the tickets at a lower price, which allows them to attract more customers.

The authors of the bill believe that the airlines, having the opportunity to sign with the passenger contracts of carriage on different conditions providing for return and nonreturn rates, can reduce the cost of air travel, increasing the mobility of the population. These innovations should also help to ensure equal competitive conditions for Russian and foreign airlines.

The bill will soon be considered at a meeting of the government.