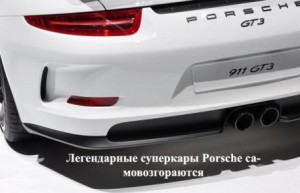 A number of Internet publications reported that over the past few weeks have been 5 recorded cases of engine Bay fires Porsche 911 GT3. One of the cases resulted in the complete destruction of the car. This case happened in Switzerland.
The driver behind the wheel of a supercar at the time of the fire, he heard a strange sound appeared in the engine area. He stopped, got out and saw the smoke and the fuel leak. Literally his car caught fire and was fully engulfed in flames. Unfortunately, to save the car failed. The police of the Canton of St. Gallen, which is tasked to investigate the incident, reports that the damage from the incident amounted to 200 thousand Swiss francs (or 8 million).

Fire, Porsche 911 GT3 and recorded in Italy – they said the leaders of the Italian club of Porsche owners. One owner of this vehicle with mileage of only 60 km collided with spontaneous fire, but he managed to cope with the flames and save your car. Now this sent a car dealership.

According to rumors, the Porsche specialists have found the cause of the fire, but can't find a way to fix it. It is for this reason the Porsche 911 GT3 decided to temporarily cease to supply customers.

Recall that the Porsche 911 GT3 is equipped with a 3.8-liter engine. The car accelerates to 100 km/h in less than 3.5 seconds. In Russia the minimum cost of this supercar is more than 7 million roubles.