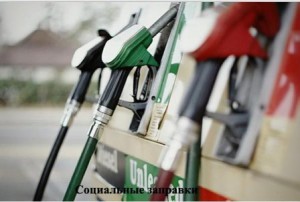 11 of february 2014, the head of the Union of oil Industrialists suggested, to differentiate the price of gasoline depending on the income of consumers.
Gennady Shmal expressed the idea that people who have high salary (400-500 thousand roubles), can afford to buy fuel, not only on 35 rbl. for litre, but also more expensive. And for people whose income is small, even 35 rubles. per liter is expensive.

According to Gennady smile of this issue will help resolve "social charging". He proposes to introduce a specific norm in liters, tucking that, people will be able to pay less. For example, 150 to 200 liters. Over these liters, it is proposed to fill up at the regular price. This approach is used, for example, in Iran. The norm in Iran 200 liters, for her people pay a few rubles.

The emergence of this idea due to the fact that Russia is a country producing oil. However, the price of gasoline inside the country is quite high. With about 50-60% of the price of gasoline is taxes. Gennady Shmal sure that the introduction of such standards will not only improve the situation in the country, but will also stimulate entrepreneurs.

Gennady Shmal said that the car now is not a luxury or a means of transportation, and often the means of business organization. The government aims to maintain the business that it is impossible with such high fuel prices.

The cost of gasoline in the Russian Federation

In some regions of the country fuel prices are above average, so the need for "social stations" overdue and requires implementation.