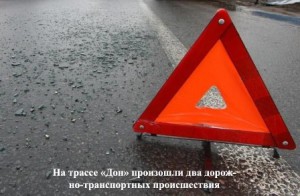 11 of february 2014 on the track "don" (Lipetsk region) there were two serious accidents.
The first incident happened at 12:20 Moscow time. The accident occurred on 527-m kilometre of a highway. Faced four trucks. They are unable to climb on the rise and has been blocking traffic in both directions. Traffic police promptly reacted to the situation and organized a movement for the alternative route – the road through Zadonsk. The consequences of the accident as quickly as possible trying to eliminate.

The second accident occurred at 13:30 Moscow time on the 418-kilometer. Also faced two trucks. According to the preliminary data of this accident there are victims. The traffic police and the emergencies Ministry are already working at the scene.