Главная Society & Culture Paul Walker: the results of the investigation into the death star 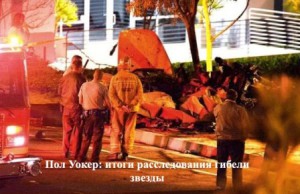 26 of March. The documents were made public on the results of the investigation into the death of a Hollywood star.

According to the documents, to the accident that killed Paul Walker, has led a significant speeding. During the accident the vehicle speed Porche Carrera GT, driven by Paul Walker and his friend, was about 130-160 km/h. On that stretch of road speed limit 70 km/h. it also States that investigators found that the accident caused no mechanical damage to the vehicle, namely speeding.

In order to get to the true causes of the crash, experts analyzed data of the computer in the car, took the testimony of these video cameras located at traffic lights and buildings on the entire route of the car.

Recall that Paul Walker, who performed one of the leading roles in the movie series "fast and furious", died on November 30 in Santa CLARITA (city in California). He was driving with his friend in the car. Walker was in the passenger seat, his friend Roger Rodas was behind the wheel.

After the death of Paul Walker the film company Universal Pictures, which had to stop shooting the seventh part, "Forsazh", since the actor was involved in these shootings. Paul Walker managed to complete about 60% of the film. The production company announced that filming will continue in early April. The Director James WAN will be about a year for the final preparation of the film. The premiere is scheduled for April 10, 2015.