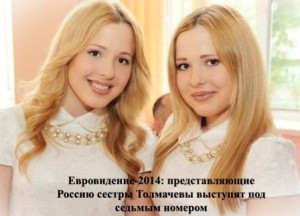 26 of March. It became known that the sisters Anastasia and Maria Tolmachev will perform in the first semi-final of "Eurovision-2014", which will take place in Copenhagen on 06 may this year, under the seventh room.

The Tolmachev sisters will perform the song "Shine" ("Shine") by a Russian pop star Philip Kirkorov and Greek composer and producer Dimitris Kontopoulos.

In the first semi-final the sisters have to deal with artists from Albania, Sweden, Latvia, Iceland, Armenia, Azerbaijan, Hungary, Moldova, Estonia, Belgium, Portugal, Montenegro, the Netherlands, Ukraine and San Marineo. 08 may, will host the second semi-final.

May 10 will be the final part of the contest. It will be 10 participants from each semi-final.

Automatically the participants of the final are the founders of "Eurovision" - is Germany, great Britain, Spain, France and Italy. Also in the final automatically is the host nation of the competition – Denmark.

Anastasia and Maria Tolmachev in 2006 won the Junior Eurovision song contest. Then they sang the song "Spring jazz". Sisters and were born in Kursk in 1997.