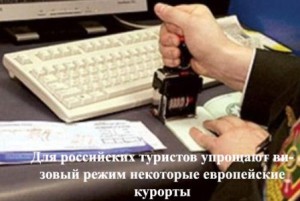 26 of March. Some European countries have expressed their desire to simplify the visa regime for Russian tourists. Among the countries of abolishing some requirements are Greece and Italy.

Not far off the holiday season, so the offer of the European countries just in time. Italy was the first country that declared the simplification of the visa regime with Russia. Cesare Maria Ragalini (Ambassador of Italy in Russia) stated that the Italian visas will now be issued free of charge to those Russians who are planning to visit Italy because of the performances of Teatro arena di Verona, music festivals in Macerata or an exhibition dedicated to the 450th anniversary of the death of the famous Michelangelo (it will be held in Rome may 14 – September 28).

Another country that expressed a desire to simplify the visa regime, is Greece. Maya Lomidze (Executive Director of the Association of tour operators of Russia) said that meetings were held with the Consulate of Greece. At these meetings, the Russian side was assured that visas for Russian tourists will be issued as quickly as possible.

The Association of tour operators of Russia to get the final confidence in relation to tourist visas, were sent to the Consulate popular among Russians countries in Europe, the requests to clarify whether the changes in visa rules for tourists from the Russian Federation.

Responses to formal requests, the Association waits for the current week.