Главная Society & Culture Amendments to the SDA: it is useful to know pedestrians 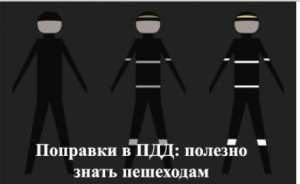 18 of February, 2014. On a Single portal of legal information published draft amendments to the Rules of the road, containing a provision on the responsibilities of walkers to carry items with elements that reflect light. Pedestrians should wear reflective items in the dark to improve visibility for drivers.
Recall that until recently pedestrians only recommended in the dark to be in possession of such items.

Under the new Rules of the road, if the pedestrian in the dark will go on the roadside or crossing the road without reflective object, it can be fined in the amount of 500 rubles.

In the road Rules would be amended and the pedestrians crossing the tram tracks. Previously, the Rules only regulate the transition of roads. Actually the current project of amendments is designed to create a safer place for pedestrians.

Drivers will be required not just to reduce speed or to stop before the crosswalk, if the pedestrian stepped, namely to give way to the pedestrian.

Also tweaked the article about overtaking on the unregulated crosswalk. The project says that overtaking will be forbidden in that case, if the car beside slowed down or completely stopped. In this case you will also have to reduce speed or to stop completely. Before the driver was allowed to go on if he became convinced of the safety of their maneuver (i.e., in front of his car there are no pedestrians).

In the draft amendments to the SDA proposes to consolidate the rule for cyclists and moped drivers. It is proposed to forbid them to cross the road on "Zebra" on my technique. Only allow to carry it in your hands.

The need for amendments caused by statistics. The majority of pedestrian accidents occurs in the dark due to the fact that the driver cannot see pedestrians.