Главная World The record for simultaneous registration of marriages 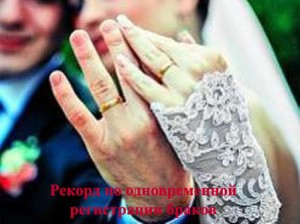 16 of February, 2014 in Mexico more than 1,500 couples have registered their relationship at the same time.
Immediately 1590 couples have registered their relationships in the Mexican capital is an absolute record for simultaneous registration of marriages. Collective marriages were organized in the framework of the Day of love and friendship – a holiday revered in Mexico.

The couples were very different. One pair particularly stood out. In were married elderly. The groom was 66 years old and the bride is 62. But it's not the most interesting. The most surprising thing is that individuals not before 50 years have lived together without registering their marriage.

Collective wedding on Valentine's Day is already a tradition in Mexico. Such weddings are held for many years on money from local authorities and sponsors. This is done primarily to reinforce moral values and to encourage couples who were "not officially", the official establishment of the cell society.

The mayor of Mexico city, wished the newlyweds mutual respect and happiness in marriage. The end of the ceremony was marked by the announcement of the head of the city administration the ceremony of "universal kiss" than with pleasure have used all the pairs.

By the way, in Russia on St. Valentine's Day marriage combined almost 400 pairs.