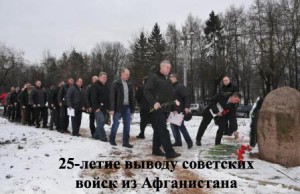 15 of February, 2014 Russia has celebrated the 25th anniversary of the withdrawal of troops from Afghanistan.

Lee learned a lesson from the events of those years? Let's try to understand.

The deployment of troops to Afghanistan began in December 1979. The troops, hastily formed, crossed the bridge over the river Amu Darya on the territory of the hostile Afghanistan. At that time no one imagined could not, what will be the consequences of this step. Didn't know then, and who will have to fight, and how long this mission.

February 1989 was marked by the transition of troops from Afghanistan to Russia. Between these two dates a huge gap, a huge number of human lives that no one will ever fill. Sending people to certain death, the generals and the marshals said about the need to perform "international duty". Returning soldiers back, without going into details, reported that duty performed, the policy in this case simply remained silent.

After so many years, much seems different. Some still stable stereotypes it's time to reconsider.

The steady stereotype of the criminal nature of the campaign. What never ceases to remind the Russian liberals. For some reason, forgotten about even more long-term presence of U.S. troops and their allies. Strangely enough. Because if you think about it and lower the whole ideology, and Soviet and American troops in Afghanistan doing the same work – fighting with rabid extremists, defending their national interests.

For an objective assessment of what happened at the time, should remember the real picture of the reality in the region in the late 70-ies.

In 1978 in Afghanistan the leftist-minded officers was arranged "April revolution", which is ahead of another mutiny, which long prepared Islamic radical organization. Up to this point, their battle groups attacked the provinces of the country. But gradually the power became stronger and began to influence policy in the region.

If you look back a little, you can see a very different Afghanistan. All previous decades before these events, Afghanistan was a purely secular state. There were schools, Universities, cinemas, restaurants. At one time, it even hung out with the hippies. In Afghanistan reigned rather loose standards on Islamic morals.

This country is skillfully balanced between the superpowers. Afghanistan was helped by the USSR and the countries of the West. The Afghans liked to joke: "American cigarettes we prikryvaem Soviet matches".

Happened revolution was a catalyst for mojaheds groups and their sponsors who, by supporting the Mujahideen, fought his game on the field.

This revolution in Moscow reacted quite favorably. Therefore, to support the battle groups of the Mujahideen joined a more serious force. Began increasingly to break out of the uprising of Islamists across the country. In the spring of 1979 to the side of the Mujahideen moved infantry division of Herat. The Afghan leadership in March 79th begged of the CPSU Central Committee to immediately provide them with military assistance. Herat mutiny was a kind of impetus for US to intensify action on Afghanistan.

At that time the U.S. was defeated in Iran, where American troops were forced to withdraw after the overthrow of the Shah. Humanity, seized power, have been criticised by the Americans. Formed a piece of land, rich in oil, which while abandoned, but the Americans feared that the USSR will conquer this piece of land. Then USA made a plan to support the Islamists.

American intelligence, preparing large-scale actions in support of the Islamists, hoping that they will be able to drag the Soviet Union into this fight, to bleed.

CIA analysts reasoned that if the military power of the guerrillas in Afghanistan will be strengthened, then Moscow will have to step up military assistance to the Afghan regime until military invasion. And this will serve as a trap for the Soviet troops. On the one hand the USSR get bogged down in a long bloody war with the guerrillas. On the other hand – Western propagandists will receive, at last, evidence of the treacherous actions of the Kremlin. The longer the war will Deplete the forces of the USSR that will help the United States win the cold war.

That's why that first Soviet generals seemed easy and short "journey beyond the Amu Darya" soon turned into a protracted and grueling campaign. The Soviet troops faced not with a frenzied rebels, and with a powerful force, which received assistance from Western countries, Arab countries and China. None of the rebels in the entire history did not use such powerful support.

Go over this bridge across the Amu Darya in one direction was easy, but to get out again is almost impossible. The senselessness of this war began to realize in the time of Andropov. However, he was to withdraw had not. With his death, came to power Chernenko, and he hands it never came. And only after Gorbachev started the process of liberation of the Soviet troops from this trap.

The leaders of the USSR not without reason, feared the radical sentiment that could spread to the countries belonging to the USSR. South of the Republic and then was fertile ground for religious extremism. Therefore, Soviet forces defended national interests, guarding peace on their land.

This is the feeling that the realization of this mission lies in the hearts of all veterans of Afghanistan, welcoming the 25th anniversary of the end of this bloody and long war.

In the time that has past since those times, about the war in Afghanistan written volumes of books, filmed many documentaries. That war brought, though bitter, but enlightening experience. Many useful lessons could be learned from that war. Many mistakes could have been avoided. But, alas! The leaders of our country do not apply lessons learned. Otherwise we would have escaped the war in Chechnya would have long ago rebuilt the armed forces.