Главная Migration Latest migration news 2019: what has changed in the field of migration... 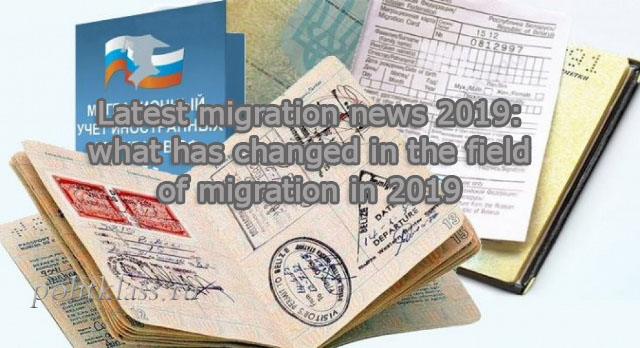 The cost of a work patent

In 2019, the fixed advance payment for the patent increased in almost all regions of Russia. We have already written about this in the previous article.

Recall that it is extremely important to pay for the patent during and in full, as late or incomplete payment will lead to automatic revocation of the patent in the database of the Ministry of internal Affairs.

Therefore, we recommend that you study the news about the change in the value of the patent and check the amount when making payment.

Good news-the period of temporary stay in Russia for citizens of Ukraine from the DPR and LPR increased to 180 days from the date of each entry into the territory of the Russian Federation. The decree about it was signed 29.12.2018 (Decree of the RF Government dated 29.12.2018 N 1744 "increase of the period of temporary stay in the territory of the Russian Federation of citizens of Ukraine, constantly living in territories of separate districts of Donetsk and Lugansk regions of Ukraine").

Earlier, residents of Donetsk and Luhansk regions could stay on the territory of the Russian Federation for 90 days, as well as other foreign citizens who arrived in visa-free order.

In 2019, there will be fewer invited labor migrants. This is due to the fact that the quota for issuing work permits to foreign citizens who arrived on a visa order was reduced in 2019. In addition, the quota is distributed by sectors of the economy.

Also, the number of foreign visa workers in the construction sector is limited: now their number should not exceed 80% of the total number of employees. Previously, such restrictions did not exist. These restrictions will not affect Moscow, Khabarovsk territory and the Amur region.

The state Duma is considering a draft law on state regulation of taxis. This law has already passed the first reading. It is likely to be adopted in the near future. This law will regulate the operation of taxis, including the work of foreign citizens and foreign aggregators.

According to the proposed norms, foreign citizens who do not have citizenship of the Russian Federation or a permit for this type of activity will be prohibited from working in a passenger taxi.

In addition, you will need to obtain a work permit for a taxi driver on a specific vehicle registered in the Russian Federation. The permit will be issued for a period of 5 years. This permission will need to be presented at the first request of the passenger or a police officer. To obtain this permit, you must have a driving experience of at least 5 years.

Since July 2019, it is planned to introduce mandatory photographing and fingerprinting of all foreign citizens who arrived in a visa-free order, with entry into a single migration base.

Currently, visa-free foreign citizens are required to register for migration within a certain period of time by notifying the Ministry of internal Affairs of the Russian Federation of their place of stay. From July 2019, when submitting a notification, foreign citizens will be required to take photographs and fingerprinting.

Recall that currently fingerprinting is mandatory for foreign citizens wishing to obtain a temporary residence permit, a patent for work, citizenship of the Russian Federation, a work permit, as well as asylum. It is possible that fingerprinting will be carried out at the border at the entrance to the country and on the territory of Russia.

It is planned to make the residence permit of indefinite duration. According to the plan, the draft law providing for this innovation will come into force in September 2019.

In addition, the President of the Russian Federation is currently signing draft law No. 527255-7 on amendments to the law "on citizenship", which provides for many changes in the procedure for obtaining Russian citizenship.

At the moment, other categories of foreign citizens can obtain Russian citizenship in a simplified manner, details here.

If the article was useful, please share with your friends the news about the innovations in the field of migration.

If you have any questions, please write in the comments, our experts will be happy to help you.

Join our groups in social networks to always be aware of all developments in the field of migration and not only to learn about all the innovations in migration and other legislation.