Главная I`m Reporter Mortgage for the rich: why secured people loans for the purchase of... 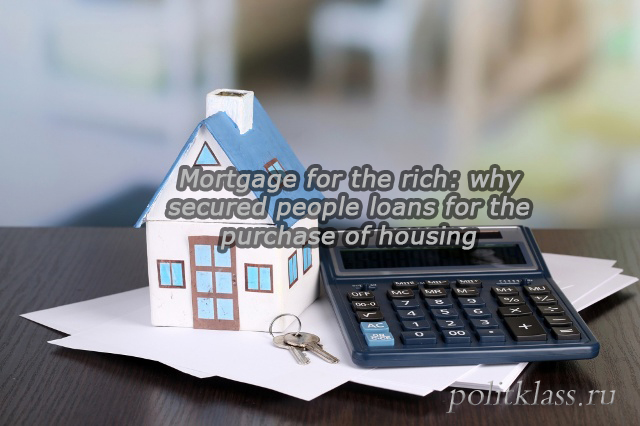 May 31. In the early 1990s and 2000s, only wealthy citizens could afford a mortgage in Russia. In the period from 2014 to 2016 mortgage helped to resist the construction industry in the segment of mass housing. But what is now pushing wealthy people to buy luxury housing in debt?

The popularity of mortgages in the elite housing market in Moscow is growing. According to the real estate Agency Savills, for the first quarter of 2018, the share of mortgage transactions in the segment of elite new buildings exceeded 20%. Over the past year, this figure has doubled, and compared to the same period in 2016 – six times. Mortgage popular in the secondary market of luxury apartments in Moscow: the mortgage is purchased every tenth luxury apartment.

Why are more and more people thinking about buying luxury apartments in the mortgage? Often, they are guided by five reasons.

If you like the property, and save millions of dollars has not yet happened, of course, the buyer is thinking about getting a mortgage. After all, in the case of a mortgage, you can buy a house without shelving.

Now in the market of premium housing there is a real construction boom: the supply is growing. At present, there are more than 2,600 apartments and apartments in this segment, which is twice as much as five years ago. Accordingly, the choice of buyers have, you can choose what you want it, and it does not overpay. Many projects can be purchased at the initial stage, when the price is still so low that the purchase has the investment potential: as the construction of the house price can grow significantly (from 15% to 50%).

Here is a real example, a person bought an apartment in a newly built house in a luxury residential complex in Moscow for 58 million rubles of Their money was RUB 29 million, the remainder of the mortgage for 10 years at 9.6% per annum. Monthly payment amounted to 375 thousand RUB over the 2.5 years the house will be built and delivered, this man plans to sell the apartment not less than 90 million rubles, This figure is confirmed by current prices in an already built building complex. The total cost of purchasing housing (own funds plus mortgage payments for 2.5 years) will be approximately 65 million rubles. Accordingly, the expected income from the resale of the apartment - 25 million rubles. Thus, the return on investment will be 38% for 2.5 years, or 15% per annum.

During the approval of the mortgage transaction, the Bank:

Currently, as a rule, wealthy people have their own lawyers who can control the "purity" of the transaction. At the same time, the Bank has entire departments working on it. Therefore, the acquisition of real estate through the Bank avoids ill-conceived, emotional, irrational and very risky from a legal point of view decisions. For many buyers, approval of the transaction by the Bank is a kind of confirmation that they make a balanced and thoughtful decision.

To keep the money in profitable business

Among the wealthy people planning to purchase luxury housing, many are owners of their own business. If they take a mortgage at 10% per annum for the purchase of housing here and now, it allows them not to extract money from the business, where they work much more efficiently.

On average, large business now brings its owners 15-20% per annum. Taking money out of it, the owner faces the risk of loss of substantial income. Why entrepreneurs are increasingly opting mortgage. In the first quarter of 2018, 150 deals were held in the premium real estate segment of Moscow, 30 of them – mortgage. The average term of a mortgage loan was 17 years. The initial payment was 40-60% of the cost of the object (on average about 63 million rubles.). The average monthly payment at the rate of 9% with an initial contribution of 40% for a period of 17 years will be about 360 thousand. RUB per month.

It is no secret that under the law, realtors and developers are required to report to the bodies of Rosfinmonitoring information about the concluded real estate transactions. A significant difference between the cost of real estate and income may raise questions about the origin of the money in the future. Mortgage removes such issues and in theory avoids excessive issues on the part of the tax service.

Mortgage allows you to insure risks, including foreign exchange. Currently, most prices for luxury real estate are set in rubles. In this regard, the buyer has reasonable thoughts about whether to change dollars into rubles for the purchase of an apartment. The dollar can rise sharply by tens of percent even in a week. In the housing market such growth is not observed. Many buyers prefer to keep most of the funds free in the currency. For them now to change the existing currency into rubles is quite a difficult decision.

The way out of this situation is a mortgage. The 9% rate in case of a collapse in the foreign exchange market can be won back just in a day at the expense of the currency.

Credit organizations are constantly trying to offer customers mortgages on more favorable terms, which attracts more and more new borrowers. For secured clients, most banks offer special conditions for mortgage loans. First of all, we are talking about the amount of the loan, which can be up to 100 – 150 million rubles, in contrast to standard programs with a limit of 25 – 30 million rubles.Wealthy customers receive more favorable rates, which are lower than the standard by 0.25 – 0.5%. Banks are ready to show loyalty about the health and age of the borrower.