Главная I`m Reporter Khodorkovsky: a biography of the former head of Yukos 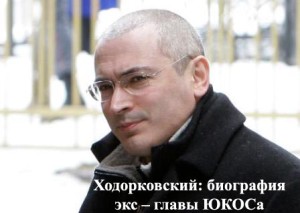 Khodorkovsky, Mikhail Borisovich was born 26.06.1963 in Moscow in an ordinary family. His parents were chemical engineers, who never worked at the Moscow plant "Caliber". Khodorkovsky family lived is rather poor. Until 1971, they lived in a communal apartment, then moved to separate housing.

Michael graduated from high school No. 1503. In 1981, he entered the Moscow chemical-technological Institute. D. I. Mendeleev, T. K. was always interested in mathematics and chemistry. In parallel studies, Michael worked as a carpenter in the HBC "standard". However, the work did not interfere with the studies, Mikhail Khodorkovsky throughout the study was the best student of the course. As a student, Khodorkovsky married his classmate. In 1985 the couple had a son, Paul. In 1986 Khodorkovsky graduated with honors from the Moscow chemical-technological Institute. D. Mendeleev and became a certified engineer.

In 1987, Michael and his friends organized the Interdisciplinary centre for scientific and technical creativity of youth (NTTM). This center was engaged in various activities: import and sales of computers, sales of alcoholic beverages, etc. – i.e. everything that is at that time brought a good income. However, the organization was engaged in cashing. Subsequently, Khodorkovsky admitted that it was then that he received his first large profits.

Parallel to its activities in NTTM Michael continued his studies at the Institute of national economy named after. Plekhanov. He graduated from the Institute, he in 1988 and received the speciality "financier".

From 1989 to 1990, Mikhail Khodorkovsky held the position of Chairman of Commercial innovation Bank of scientific – technical progress (STP CIB). Then, in 1990, the Bank changed its name to Interbank Association "MENATEP". Khodorkovsky became Chairman of the Board of "MENATEP". "MENATEP" was one of the first banks licensed by state Bank of the USSR.

"MENATEP" has been active in foreign exchange operations, sold its shares to individuals. In the future, Khodorkovsky became the Advisor to the Prime Minister of Russia, and also developed relationships with energy Minister Lopukhin.

In March 1992, with the support of Khodorkovsky Lopukhin was appointed the President of the Fund for investment in the fuel and energy complex.

In 1997. Mikhail Khodorkovsky became Chairman of the Board NK "YUKOS".

Khodorkovsky, becoming the owner of Yukos, became interested in the development of this new business. Bank "MENATEP" was placed in the hands of hired managers.

After the country defaulted in 1998 foreign companies were afraid to do business with Russia. However, Khodorkovsky realized that the need to attract foreign investment. And started to "improve" the opinion of foreign investors about Russia.

At the end of 1998, Yukos began the reform of the management system. During this reform consolidates over 90% of shares of "Samaraneftegaz" and "Yuganskneftegaz", 50% of actions "Tomskneft" and also converted the shares of four oil refineries.

As a result of the reform, the shares of Yukos have risen in price.

Khodorkovsky took an active part in the social life of the country. In 1994 on his initiative, opened the Lyceum – a boarding school for disadvantaged children. In 2002, the company YUKOS has created the Fund "Open Russia", whose aim was to increase the public's trust in business.

In 2003 an agreement was signed between Yukos and "Sibneft" about Association of actives. This Association would enable Yukos to take fourth place in the world in oil production.

However, in 2003, there was a conflict between Putin and Khodorkovsky at a meeting in the Kremlin. Khodorkovsky made a presentation on corruption. This report has caused irritation of Putin. This event according to many professionals, has become this "trigger". Two weeks after this event, some employees of Yukos have become accused in several criminal cases. Subsequently criminal proceedings brought on Lebedev and Khodorkovsky. After meeting Putin with Khodorkovsky no longer met.

At that time, some scholars and prominent figures talked about the fact that Khodorkovsky is a serious candidate for President of the Russian Federation. Vladimir Putin is such a competitor is not feared.

Khodorkovsky had been imprisoned for 10 years. The decree on his release Vladimir Putin signed 20 December 2013. The release happened so quickly that Khodorkovsky was not given time even to change prison jumpsuit for a suit. By an official car of the FPS he was taken to the airport of Petrozavodsk. From there by plane Tu-134 of Khodorkovsky was taken to St. Petersburg. From there on the private plane of the former head of the German foreign Ministry, he flew to Berlin.