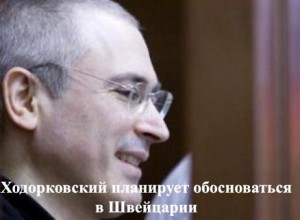 10 of March, 2014 Mikhail Khodorkovsky, the Russian ex – businessman has filed documents to obtain permanent residency in Switzerland. This was officially reported by its representative Werner Seppi.

Also Werner Sappi reported that Khodorkovsky love this country and he plans to settle in Switzerland. Other information relating to the future residence of Khodorkovsky, the representative refused to disclose. Local media of Switzerland reported that the former businessman and his family settled in Montreux.

However, Sappi said that Khodorkovsky has no plans to get Swiss citizenship.

How he freed Khodorkovsky

Ex – businessman immediately flew to Germany. Later he moved to Switzerland, where he has a family.

In General, the former head of Yukos had been in prison for over ten years. The imprisonment of Khodorkovsky was due to expire in August 2014.

Than for Russia will turn the fourth term of Putin

The choice, which is not: why the Russians did not notice the election race

Volodin nominated for the post of the State Duma Speaker