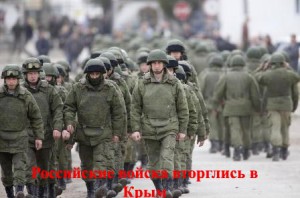 The United States stopped military relations with Russia because of the invasion of the Crimea. Ukrainian news reported that the Pentagon stop all your visits, exercises and other common activities with Russia.

Sergey Aksenov reported that the Verkhovna Rada of Crimea has given him authority of the chief of the armed forces of the Crimea. Aksenov said that the decision was made because of the obvious invasion of armed forces of Russia.

He also set a task to create in Crimea armed with front numbering 1500 people. Recent data indicate that 186 volunteers took the oath and joined the army of the Crimea.

John Kirby, rear Admiral U.S. reported that the Pentagon has warned Russia to de-escalate the conflict and withdraw troops from Crimea in accordance with the agreement on the stationing of the black sea fleet of Russia in the region.

The United States also intervened and mobilized troops in Europe and the Mediterranean.

This is due to the events of 27 February, when unidentified armed men seized the building of the Crimean Parliament. Now over the building raised the Russian flags. The next day were captured by airports of Sevastopol. Over the Crimea have blocked airspace. Also blocked the entrances on the land through the isthmus between the cities of Armyansk and Chongar. The Minister of defence of Ukraine Igor Tenyukh said on 1 March that Russia continues to build up military forces in Crimea. Or rather, 8 of Il-8, Mi-8 and 24 10.

However, the Secretary of national security Council of Ukraine Andriy Parubiy said that the invasion failed and the Ukraine, nothing threatens. Andrey Paruby believes that Russia tried to implement the "Georgian scenario". It provokes an attack from the Ukrainians.

Arseniy Yatsenyuk Prime Minister of Ukraine announced that Eastern Ukraine will not let the troops into their territory. He also assured that Ukraine accepts only true and non-hazardous actions.

The news about the invasion of Russian troops - another "duck", launched on the Ukrainian channels, to foment ethnic conflict and drag Russia into the war.

The Russian Parliament says Crimea can become part of Russia if its people vote for it in a referendum. On Thursday the Crimean Parliament has changed the wording of the problem. The population is encouraged to vote not for more autonomy and accession to Russia.