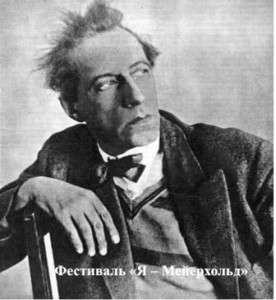 10 February 2014 in Moscow the theatrical festival dedicated to the 140th anniversary of the classic of Russian avant-garde.

The festival will last a week. The program includes: exhibitions, presentations, conferences from leading theaters of Moscow and St. Petersburg. The exhibition "Meyerhold and Rodchenko" will open the festival. This exhibition will be presented to the audience the artifacts of Russian avant-garde. After the exhibition, the audience will hear a new play by Elena graminei about the life and work of Meyerhold.

It is assumed that the most interesting event of the festival will be a theatrical anthology, consisting of eight small performances. Directors participating in this festival are people who are not afraid of everything new, love to experiment. The organizers said that the only thing they limited Directors is a topic and time. The Directors have provided 20 minutes for their performances. Genre, form is solely the choice of the author.

Bolshoi drama theater, participating in the festival, will present a collective composition that will also be very interesting to see.

Also in the festival will participate: the Moscow theatre of Mayakovsky, St. Petersburg theatre named after Lensovet and some others.