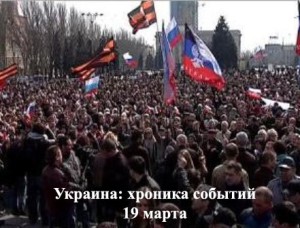 19 of March. The day began with a statement by Arseniy Yatsenyuk (Prime Minister) in which he severely condemned the actions of the deputies of the party "Svoboda", Oleksandr Panteleymonov beaten (temporarily acting as head of the "National broadcasting company of Ukraine").

In the beginning of the day, the Ukrainian foreign Ministry was caused by charge d'affaires of Russia in Ukraine Andrey Vorobyov. He was handed a note of protest concerning Crimea.

Dmitry Peskov – press Secretary of the President of Russia said in an interview that Russia will make every possible effort to help Russians living on the territory of Ukraine.

At 7:22 Moscow time Igor Sechin said that "Rosneft" will defend all of its assets located in Ukraine.

At 9:14 in Belgorod profits of Ukrainian military observers for inspection.

At 13:01 GMT was a criminal case on the fact of illegal actions on the part of deputies of the party "Freedom"

13:09 GMT Yatsenyuk proposed the introduction of a tax on income on deposits in excess of $9.4 thousand

At 13:30 Moscow time in the Crimea, flew the first Deputy Prime Minister and Minister of defence of Ukraine.

14:22 Moscow time the commander of the naval forces of Ukraine Serhiy Gaiduk and some 50 officers left the territory of Sevastopol.

15:32 GMT the European Commission has decided to provide Ukraine assistance in the amount of 1 billion euros.

16:45 the Russian Federal border service reported that the regime of crossing the border from the Russian side remains unchanged.

At 17:15 Moscow time Ukraine expressed his rejection of the chairmanship in the CIS

17:43 of the Ukrainian foreign Ministry handed a note of protest to Russia in connection with the death in the Crimea Ukrainian military

At 18:55 Moscow time the court of Kiev arrested on 2 months organizer of rallies in support of Kyiv in Odessa

At 19:08 Moscow time the Ministry of internal Affairs of Ukraine, conducting inventory of weapons, found evidence of shortages

At 19:58 Moscow time Germany has approved the signing of an agreement between the EU and Ukraine

At 21:31 GMT the national security Council of Ukraine (NSDC) announced the introduction of a visa regime with Russia

At 22:03 GMT the government of Ukraine adopted a decision to withdraw from the CIS

23:41 in the center of Kiev burned the House of the architect.

NSDC has proposed to the government about the need in the UN for the purpose of requesting aid and recognition of the Crimea demilitarized zone. The United States believes that Russia were involved in a shooting in Simferopol. Of particular concern in Washington is causing information about the death of the Ukrainian military.