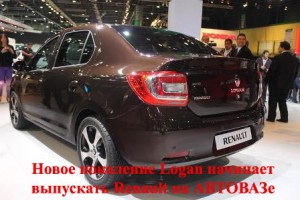 Bruno Anselen, said that the Assembly of the test specimens at AVTOVAZ ended in January 2014. Now car factory produces commercial vehicles. Currently the plant is enough to collect a few dozen vehicles per day.

In the sale of new Renault Logan will appear in the second quarter of this year. Specifications and price on a new car are still kept secret. It is noteworthy that in Ukraine a new generation Logan for sale for about a year. Cars are supplied to Ukraine from Romania. These cars with manual gearbox, equipped with petrol engine volume 1.2 and 1.6 liters, there are also instances with a diesel engine. The price of the car in Ukraine starts from 482 thousand rubles.

Old Logan in Russia costs from 361 thousand rbl. we will Remind that the old model Logan is also produced in Russia by Avtoframos. Bruno Anselen, informed that the old Renault Logan is limited in capacity, AVTOVAZ, the company will be able to produce cars in large volumes.

Regardless of the early release of the new generation Logan, Renault has no plans to abandon the production of old Logan.