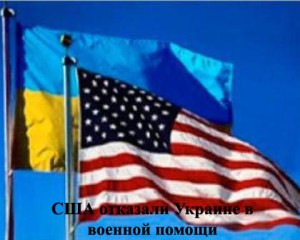 14 of March, 2014 the newspaper the Wall Street Journal published an article that the US decided not to provide the new authorities of Ukraine military assistance.

The Pentagon agreed to send to Ukraine only individual production soldering.

The newspaper quoted an administration official, who said that Ukraine's new authorities recently asked Washington for military assistance, in particular: "significant" party of weapons and ammunition, communications equipment, night vision equipment and aviation fuel. In addition, the new authorities of Ukraine asked the US to share with them all intelligence information. According to The Wall Street Journal, all of these proposals, the us authorities responded with a categorical refusal.

The newspaper notes that the United States agreed to send to Ukraine only food rations. Delivery of this assistance will begin in the coming days.

The newspaper also said that the United States made it clear that he agreed to provide Ukraine with economic assistance, military assistance, currently not being considered. However the representative of administration has not excluded that in the future all the same it is possible to provide military assistance. "We do not say Ukraine is categorically "no", we said, "not right Now"" - said the representative of the administration.