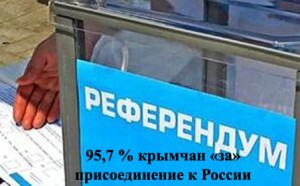 17 of March, 2014. At the moment handled about 75% of all ballots. For joining Russia voted 95.7% of voters – this was reported by Mikhail Malyshev - head of the Commission of the Supreme Council of Crimea for the referendum.

The remaining 3.2 per cent of Crimeans voted for Crimea remained part of Ukraine. 1.1% of ballots were declared invalid.

The turnout was phenomenal. Even before the opening of polling stations around them swarmed a crowd of people wanting to vote. Were organized queue. As of 20:00 Moscow time the turnout was 81,36%. In recent years the highest.

On the morning of 17 March at a meeting of the Supreme Council of Crimea it was decided to start a political process of reunification with Russia, was submitted for membership in the Russian Federation.

On the afternoon of March 17, the scheduled departure of the delegation of the Crimean Parliament to Russia for the settlement of all matters relating to the accession.

How did Russia react?

Sergei Naryshkin (state Duma speaker) said that the referendum in Crimea is, indeed, a historic event for Russia. He also said that those MPs who were in the Crimea and Sevastopol in the days of preparation and holding of the referendum, reported that people went to the referendum with joy. The ballot was lowered with tears in his eyes, and these tears were tears of joy.

Sergey Mironov has promised that all formalities relating to the entry of the Crimea into Russia will be settled soon.

Vladimir Zhirinovsky, in turn, noted that the state Duma enough from 3 days to 3 months to legally formalize the annexation of the Crimea into structure of Russia. He proposed to declare a new holiday – March 16.

The relationship between the U.S. and Russia after referendum

After the referendum, us President Barack Obama called Russian President Vladimir Putin. The President of Russia accentuated the attention of his foreign colleagues that the referendum in Crimea complied with all the norms of international law, the UN Charter.

Also in the conversation the heads of state concurred that we should try together to find ways to stabilize the situation in Ukraine.