Главная Science The new iPhone 6 will soon go on sale 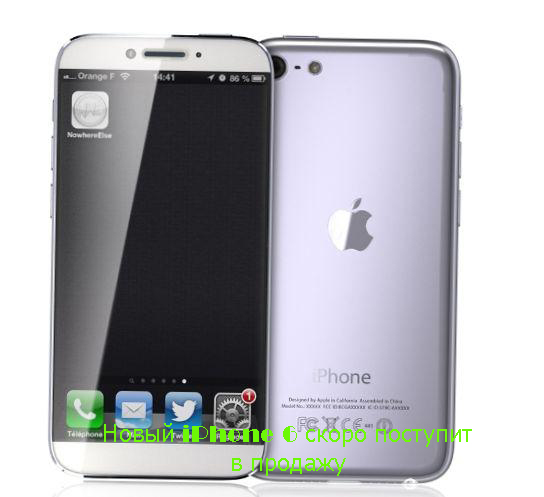 The presentation took place at the "flint center" in Cupertino. There once was presented the first Macintosh computer. The event was opened by Tim cook (Apple CEO). In the beginning he presented two new versions of the iPhone 6 and iPhone 6 Plus.

The Corporation decided to abandon the idea of models, and decided to concentrate on competition with Samsung, which produces smartphones with large screen.

New smartphones of Apple differ from each other mainly in size. The screen size in the models 4.7 and 5.5 inches, which is longer than the diagonal of the screen of the previous version of iPhone 5S (4 inches).

New smartphones are rounded, unlike the previous model. Retina displays used in the new models support the transmission of images with a resolution of 1334 x 750 (iPhone 6) and 1920 x 1080 (iPhone 6 Plus). The smartphone is available in three colors – gold, silver and gray. The device is integrated in the processor A8, whose performance is 50 times faster than first model iPhone. Compared with the previous model (iPhone 5S) the new processor delivers 50% more performance in graphics and 25% in calculations.

iPhone 6 feature barometers that can measure atmospheric pressure and, accordingly, is able to determine the change in height. New models are equipped with a LTE chip that allows you to achieve great speeds when transferring data than the previous model. In addition, iPhone 6 provide up to 3 times faster connection over WiFi than previous models iPhone 5 and iPhone 5S. About the improvements of the battery not a word was said.

In the new models of iPhone will be operating system iOS 8. In her new functions were added. For example, you can add a voice message, location data and video to any message. Also iOS 8 will be built an application that will be able to monitor user's physical activity and his health. Apple claims that the new iPhones are more environmentally friendly (in display units not used arsenic and mercury, in smartphones there is no beryllium, they are made of aluminum). The Corporation decided not to produce smartphones with a volume of 32 GB memory. Now smartphones will be produced with the amount of memory 16 GB, 64 GB, 128 GB.

At the presentation after the iPhone was introduced payment system Apple Pay, which first will allow you to use the Apple smartphones as credit cards. In order to pay, it will be enough to bring the smartphone to the PayPass terminal, to be identified by fingerprints. The Corporation will combine this payment system with accounts in the App Store and iTunes , which store data 800 million credit cards. To add a new card, will only need to photograph it. Payment system Pay Apple will begin to operate in the U.S., it supports Visa, MasterCard and American Express. When this system will appear in other countries is not yet known.

In conclusion, Tim cook introduced another novelty of the company – "smart" watches Apple Watch. In sale they will arrive in early 2015, the cost of new items from $349. Watch, not working without the iPhone, will be available in two sizes, will be equipped with Retina HD displays, to control the device to touch the screen not need. "Smart" watch is equipped with voice control, Sin, allows you to dictate messages, search for cafes, restaurants, cinemas, check the calendar, and so on. Apple Watch include wireless charging and support payment system Apple Pay. Watch is created of aluminum alloys, gold and stainless steel. The photo-sensors, and infrared light diodes allow the Apple Watch to determine the pulse frequency of the owner, and to collect statistics about physical activity in a special application.

The new users were waiting since August 2011, when the Corporation was headed by Tim cook after the death of founder Steve jobs. Apple have not provided premiere in 2007 came the iPhone, 2010 – iPad. Investors reacted positively to the news Corporation's shares, before reaching historic lows during the presentation increased (the total increase in the value of the shares amounted to 3.5%), capitalization reached almost $mn. After the presentation of the capitalization is returned to the previous level – about $590 billion.

When the novelty will appear in Russia is unknown. The representative of the company "Svyaznoy" reported that they expect new products in Russia in the near future. "If you look at the timing of deliveries of Apple gadgets in Russia, you notice that they decrease annually. If 3-4 years ago since the world premiere before the official start of sales in Russia was about 4-5 months in 2013, sales of the iPhone 5s was launched virtually a month after the presentation," - said the representative of the company "Svyaznoy".