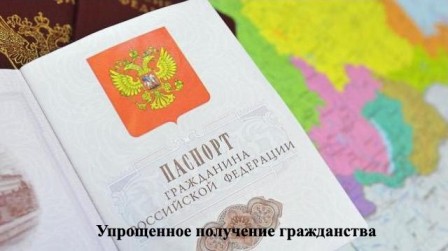 16 of April. The Federation Council approved the proposed amendments to the law "On RF citizenship" that are designed to simplify the process of getting it. The changes will affect the citizenship of Russian compatriots.

The document was earlier approved by the lower house of Parliament, aims to simplify citizenship, and also to reduce terms of consideration of applications on citizenship of the compatriots who are native speakers of Russian.

The law introduces the Institute, in recognition of stateless persons and foreign citizens by Russian language speakers. Recall that previously, no such institution existed. Or not to admit the person as a native Russian speaker, will address the Commission formed by the Federal migration service of Russia, following the interview.

Ekaterina Egorov (first Deputy head of the FMS of Russia) said that the Commission planned to include philologists and specialists from the sphere of education. However, the purpose of the interview is not a test of literacy, for example, when writing dictation. The objective will be to test the fact fluency of the Russian language and use it in everyday life.

Lyudmila Bokova (Deputy Chairman of the Federation Council Committee on constitutional legislation) in turn noted that if a person is recognised as a native Russian speaker, he will automatically receive a number of preferences.

For example, if a foreign citizen residing in the territory of Russia, renounces foreign citizenship, he will be able to get the passport of the citizen of the Russian Federation in a simplified manner. He doesn't have to abide by the terms, such as evidence of the required level of Russian language proficiency, and continuous residence in the territory of Russia for 5 years on the basis of a residence permit.

In addition, for such persons introduces a new ground for issuing visas in the simplified order of reception in citizenship of Russia of persons recognized as native Russian speakers. Offered to such persons to issue a regular visa for a year.

Who else can simplify obtaining citizenship

In the state Duma is considering another bill on simplification of obtaining Russian citizenship. According to the bill, to obtain citizenship in a simplified procedure for foreign investors, professionals and graduates of Russian universities.

Consideration of the bill scheduled for April 18.

This applies to Russians

In March 2014, the deputies proposed to introduce criminal punishment for citizens of the Russian Federation for the concealment of dual citizenship. On the proposal Vladimir Putin said that there is a need for recording the facts of presence at the citizen of dual nationality. The President instructed MPs to consider the introduction of liability for concealment of dual citizenship.

The newspaper "Izvestia" reported that deputies intend to oblige citizens to report dual citizenship, or about how to obtain residency in another country in the FMS. Failing this requirement will entail criminal liability in the form of a fine in the amount of 100 - 300 thousand rubles.