Главная Accident Boeing 777-200 could be stolen 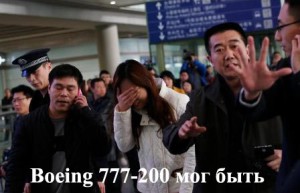 March 10, 2014 professionals who are busy investigating the cause of the crash Malaysia Airlines, do not exclude that the plane could be hijacked. This was stated by the head of the group in Kuala Lumpur.

Also, Malaysian authorities refuted the fact that the previously found fragments belong to the missing plane. To search and rescue operations connected sea and air forces of eight countries.

In the area of the alleged plane crash directed forces of Thailand, China, Australia, Vietnam, USA, Philippines, Indonesia and Singapore. The UK authorities also indicated their intention to join the search.

Disappearance of the Boeing 777

Recall that communication with the aircraft was lost approximately two hours after departure, at 22:40 Moscow time last Friday. On Board were 227 passengers and 12 crew members. The ship disappeared over the South China sea at a distance of about 120 nautical miles from Kota Bharu.

According to preliminary data, onboard the liner there were: 1 person from Russia, 154 a Chinese citizen, 38 citizens of Malaysia, 5 from India, 7 from Indonesia, 7 Australians, 4 – U.S. citizen, 33 – French citizen 2 – citizen of New Zealand, 2 – citizen of Canada and of Ukraine, 1 citizen of the Netherlands.

After the publication of the passenger list, was revealed an amazing fact. Two people boarded the plane with a fake passport. They used the passports of people who a year ago lost passport in Thailand.

It also became known that on Board the aircraft was not 2 passengers (Austrians and Italians), which were previously registered on a flight from Kuala Lumpur to Beijing by walk or bus. Two unidentified passengers bought the tickets together, at the same time in the same place.