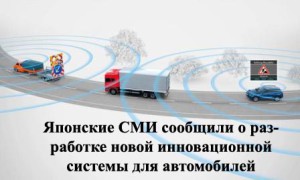 20 of March. Japanese media reported that major automakers and electronics manufacturers began developing innovation systems the relationship between cars that will allow to avoid the use of the usual horns.

In the development of the innovation system involved such giants as Honda, Toyota, Panasonic electronic Corporation, auto parts manufacturer DENSO. The goal of development is to create a universal system of communication operating in the range of 700 megahertz. It is planned that by using this system, drivers will be able to directly contact your "neighbor" on the road and to inform about the planned maneuver. It is anticipated that this system will help to improve the understanding between the drivers and, therefore, will reduce the number of accidents. It is also planned using this system to abandon the sound of the horn to which it is necessary to resort to the drivers, to prevent accidents, but often the sound of the horn produces the opposite effect, causing the accident.

It is planned that cars equipped with such system, will appear not earlier than 2017.

In General, Japan is considered a country with the safest roads. In 2013, the number of deaths in road accidents in Japan declined to a record low and amounted 4373 person. To achieve the truly great success was able, thanks to stricter traffic rules and the initiative's automobile. So, Toyota, Nissan, Honda agreed to reduce the number of fatalities to zero. To do this, they plan to introduce on the production of the newest and most modern developments, which are aimed at preventing accidents. They plan to equip their cars with various radars and other devices for automation control of the car.