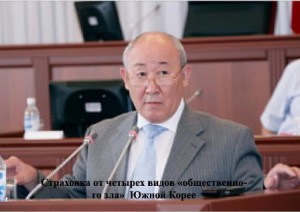 06 February 2014 – news from South Korea. Since March of the current year, all citizens of this country will be able to purchase insurance policies from four types of "evil": violence in family, school, and other prestolonasledija character and falsification of food products.

Park Geun-Hye (current President of the Republic) stated that the main priority for South Korea is wrestling with four types of "social evils". Leading insurance company Hyundai Marine & Fire Insurance ends the development of new policies. By the way, this company will be the exclusive seller of such policies.

The head of this insurance company stated that the new policies will begin in March 2014 and cover this policy will not only be financial but also moral damage that was caused to the victim.

To ensure payments under such policies, the South Korean government together with the municipal government creates the Fund.

We also learned that low-income citizens (elderly and teenagers without parents) will receive this insurance for free, others will have to pay monthly 10-20 thousand won ($18).

It is expected that victims will be compensated for the financial and moral damage that will help to create a safer society.