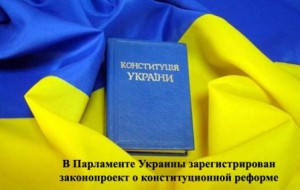 05 of february 2014 the opposition registered the bill, which provides for the return of the Constitution to the 2004 version.

The bill registered: Vitali Klitschko, leader of UDAR party,Oleg Tyagnibok – the leader of the Svoboda party and Oleksandr Turchynov, Deputy Chairman of the party "Batkivshchyna".

The Secretariat of the Verkhovna Rada confirmed the registration of this bill. However, the text of this document to familiarize yourself while it is impossible, because on the website of the Verkhovna Rada it is missing. The opposition has declared that this constitutional act is subject to the return of the Constitution to the 2004 edition (which, recall, was cancelled in 2010).

Victor Medvechuk – one of the authors of the draft Constitution explained that there are several legitimate ways the return of Ukraine to the Constitution in the previous version. First of all, because the content of the main provisions of the current version of the Constitution was not considered by the Constitutional court of Ukraine, the court can reverse its decision from 2010. We will remind, what exactly the Constitution in the version of 2010 abolished the political reform of 2004 and introduced a presidential-parliamentary form of government with extended powers to the President. Victor Medvedchuk stressed that the constitutional court of Ukraine may open new proceedings, and if there were new circumstances that were not previously subject to review, but which took place during this review and provide an opinion on the case.