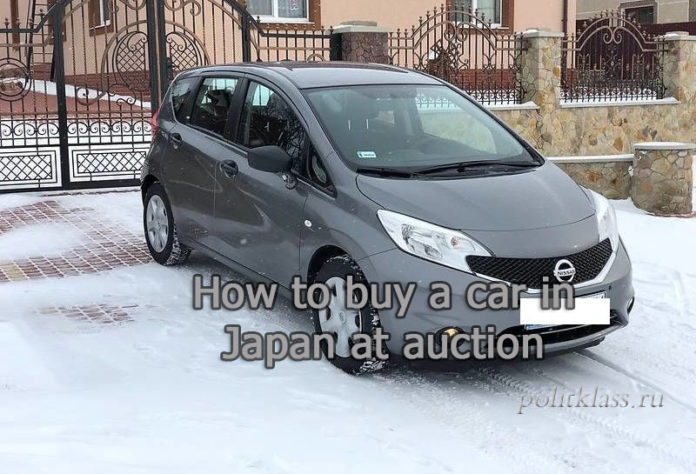 14 Feb. A special correspondent of the "Political class" bought a car at a Japanese auction and is now ready to share his experience.

First of all, I was faced with the task of choosing the "nationality" of the future car: Japanese, Korean, and maybe the domestic auto industry? Nissan, Toyota, Mazda, Mercedes, Kia, Renault, Hyundai, or maybe Lada? Brands weight, and you need to choose "your". Fortunately, up to this point I already had different cars and I concluded that I like Japanese cars the most.

Having defined, I began to look for options suitable for myself. First, of course, began to do it in the car market. However, the proposals did not please. Whole new cars with auction sheets and good grades were expensive. A cheap options were either "snag", or were bought in the Parking lot, or were broken and somehow made, and even in all not done.

The runs were also questionable.  Cars with mileage of 50 thousand km and 187 thousand km cost the same. In the first case, sold "overbought", bought a car and twisted mileage, in the second, the mileage is not twisted, but the price tag is too high.

There were interesting options, but they were immediately bought by "overbought", constantly monitoring sites for the sale of cars around the clock. So after a couple of weeks, I realized that so business will not go. And I decided for myself that I want to buy a car in her homeland – in Japan.

Before coming to this conclusion, I weighed all the "pros" and " cons":

In fact, it was easier. After analyzing the Internet, I came across a website autostavka.ru ahhh! Through it I sent a request for the selection of the car, after 5 minutes I was contacted by the Manager of the company, explained how the procedure for the acquisition of the car. Since the company is located in Vladivostok, and I live in Moscow, we agreed to exchange documents by e – mail, and the originals-by DHL.

I signed a contract, transferred an advance-50 thousand rubles, and together with the Manager we began to look for a suitable car. On the website of the company provides access to the auction cars, there is also a calculator with a full calculation of the cost of the machine, including delivery. Every auction car attached auction sheet stating all the damage and incompleteness. Lots have different ratings from "R" - " broken, with the replacement of body elements." Rating "5" is in fact new cars, which almost swept a few times and then without incident - runs have a funny – 5 – 10 thousand miles Traded for them desperately, and their prices are almost always very high.

In a couple of days I realized the pricing system in Japanese auctions. It was easy. On the website of the company there were sales statistics on cars sold, having studied that, it was possible to understand how much the car was put up for auction, for how much it was sold, and how much such a machine will cost in Moscow. I only had to believe in the honesty and integrity of company representatives sitting on these auctions in Japan.

The Manager immediately warned me that the most profitable options are cars not older than 5 years, as they have a minimum customs duty. Also helps to save the rating of 3.5 points and mileage above 100 thousand km (the machines in Japan are not appreciated). However, this run did not suit me, so much to save did not work.

And now, January 11, 2019 at the auction for me was purchased Nissan Note, complete X Dig-S, 2015 production, with a mileage of 18 thousand km, with an auction evaluation of 4 points. From damage only minor scratches on doors, bonnet and front wing – these damages reduced the rating from "excellent" to "good". The condition of the salon is "good". However, in the photos that were sent from Japan, the damage is invisible. The machine itself cost 345 000 thousand rubles, plus customs duty, Agency services, recycling fee 265 000 thousand rubles, plus GLONASS-28 thousand rubles. total: 638 thousand rubles. in the port of Vladivostok. Plus delivery to Moscow, a total of 658 thousand. and the all-new Nissan Note in good equipment from me! You could buy cheaper, but I wanted it dig-C, with climate control and other "buns". I took it for myself, so like this.

My happiness knew no bounds when the machine was delivered. By the way, managers constantly informed me about all the movements of my car, were always in touch, for which they special thanks. Of course, I was worried, the first time I ordered a car, sent money. The only thing that calmed – the contract. But somehow I didn't want to sue or anything.

From the auction, from the Parking lot before sending, on arrival in Vladivostok, when loading for transportation, photos of my car came to me on whatsapp (this was my request, which was executed without problems). It calms you down a bit when you see your car safely moving towards you.

About a month later the car was in Vladivostok. It was cleared and equipped with GLONASS system (Yes, now it is not necessary, but still there are difficulties, so I did not risk). About two weeks later the car arrived in Moscow.

The excitement is what I felt when the car came to me. She was new. No, she doesn't "put things Marafet" outbid washing off the engine, chemistry, clean salon, no. She was new to the last bolt, all in their native paint. The scratches mentioned on the auction sheet, I found difficult.

Now I'm the lucky owner of the Raccoon. The experience was useful and pleasant. So do not be afraid to order a car from auctions, do not get fooled by the bait of overbought. There are a lot of companies that help to buy cars from auctions. And not only in Japan!

If you need help in buying a car from auctions in Japan or the United States, write in the comments, fill out the form on the website politklass.ru or autostavka.ru!

Enough is enough. What the future of the car market is waiting for