Главная Sport The closing ceremony of the Paralympic games in Sochi: how it was 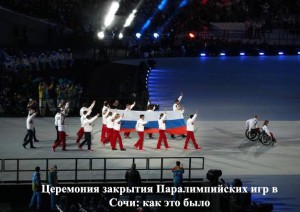 This Paralympics was the most successful in the history of Russia. The team of Russia 80 medals, including 30 gold medals, 28 silver, 22 bronze. Throughout the Paralympics, our team has gained a leading position in the unofficial tournament.

The last day of the Games has pleased fans of Russian 10 medals, 3 of which were gold.

Literally at the end of the Paralympics, a decision was made about who will be the flag-bearer of the Russian team. This important mission entrusted to Michaline Lisovoy. This beautiful skier and biathlete has won 6 awards – 3 gold and 3 silver. She truly has earned the right to carry the banner of Russia.

The ceremony itself was Grand. It started with a countdown, during which the audience saw all participants of the Games. After the end of the countdown, a group of dancers performed a dance in wheelchairs. In parallel with them in the air dancing aerialists.

Then was made the country's flag. This action was accompanied by the sounds of the Symphony No. 5 by Pyotr Tchaikovsky. After that, the scene appeared a choir of children (35 members of this choir have a disability). The choir sang the anthem a Cappella.

After that, the scene appeared tracers, skaters, skateboarders. They embody the based on the work of Wassily Kandinsky is a famous abstract artist. Appeared on the scene abstract lines, brush strokes.

Appeared on the scene-metal construction. In each of these designs was a gymnast and 4 jugglers. These structures are formed of a shape – symbols of winter sports. After that the scene began to resemble the streets of the metropolis. Skateboarders, skaters, tracers, cyclists-the freestylers gymnasts in metal structures and jugglers performed tricks under classical and contemporary music.

Then the scene depicted the game Tetris. The blocks were formed and moved. After the last colored block reached the center of the stadium "Fisht", the words "Game over".

Appeared on the scene feverishly began to move the blocks. In the end I got the word "Impossible". Just below this inscription, the actors wrote the same word, but in Russian language: "it is Impossible".

Then appeared on the scene Paralympian Alexei Chuvashev, and from the ceiling descended a rope. The audience froze in anticipation of whether he will be able to independently, without assistance, to climb up, breaking the 15-meter distance, on which were letters. Alex could, he climbed up and put an apostrophe between the letters "I" and "M". This was to symbolize that nothing is impossible, everything can be overcome by perseverance and hard work. The actors then changed the title and put a comma, it came out: "No, maybe".

Then the parade of flags. At the end of the procession was Mikhalina Lysova. All the action was accompanied by visuals of victories, defeats, joy and grief.

The ceremony of awarding the name Wang Yun Give – tireless athletes who spent their entire lives fighting for the happiness and well-being of people with disabilities. The award was presented to two athletes.

Then the audience presented the new members of the IPC, and held honoring volunteers. All action was accompanied by the song “Cosmic Love”. At the time of delivery of flowers to the volunteers, 400 of dancers formed on the stage of the heart, and after a giant inscription "Hurrah!".

The ceremony continued with dancing Cossacks with swords, dressed in colors of the Russian flag. Then the Cossacks joined the performers breakdance, among whom were artists with disabilities.

Appeared on the stage a blind pianist Oleg Akkuratov, who performed the anthem of the Paralympic games.

21:08 the flag of the IPC (International Paralympic Committee) was handed over to Pyeongchang – the city of the future winter Olympics in 2018. Transfer of flag was carried out from Anatoly Pakhomov, mayor of Sochi – to sir Philip Craven – IPC President – and, in the end, a Juice RAE Lee, the mayor of Pyeongchang.

Raised the flag of South Korea under sounds of the anthem of this country. Then on stage came a man who began to draw the hopes and dreams of athletes. Drawn dream is alive again, thanks to the artists (among whom were people with disabilities). During the dance the audience made a trip to the city of Pyeongchang.

After this solemn speech was made by Dmitry Kozak (Deputy Prime Minister) and Philip Craven (President of IPC). Philip Craven officially announced that the Paralympic games in Sochi closed.

After the speech of the President of the IPC came on stage children's choir, in the hands of the children were small oil lamps that created a shimmering plume. The children moved towards the bowl of fire, gradually blowing out the lamps. The flame of the Paralympic flame was gradually extinguished.

The gradual attenuation of the Paralympic flame took place under the anthem of the Games executable Jose Carreras, the famous tenor. Then joined Navset Chenab (Opera singer blind from birth), Diana Gurtskaya and Valeriy Kozlovsky (student of the Academy of choral art).

Then appeared on the scene 9 balls with artists inside 60 snow globes filled with helium. They staged a performance under the sounds of the theremin (the instrument that was invented in 1928 by Lev Termen).

After this show, on stage, the Cossacks. They lined up in the "No may".

The closing ceremony ended with Grand fireworks. After the fireworks, the moderator announced the beginning of the festive evening.