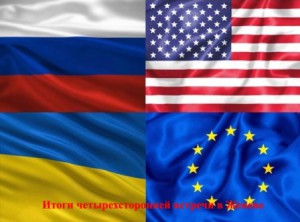 18 ofApril. The main outcome of the quadripartite meeting in Geneva approved the document on de-escalation. According to this document, all parties must refrain from any violence.

Sergei Lavrov (Russian foreign Minister) said Russia would do its best to contribute to the activities of the OSCE mission in Ukraine to establish a peaceful dialogue between the parties. Lavrov stressed that the OSCE mission needs to take a leadership position, establishing a dialogue between the parties. Its performance must be objective and fair.

The head of the Russian foreign Ministry noted that the parties agreed to hold further meetings in various formats, including a trilateral meeting with the participation of Russia. The US and the EU show a sincere interest in the peaceful resolution of the situation. Now it's up to Kiev authorities which should ensure the fulfillment of agreements made in Geneva.

Sergey Lavrov said that all illegal armed groups, existing in Ukraine, must be immediately disarmed. The Ukrainian authorities must immediately start a peaceful dialogue with the citizens of their country.

Lavrov also noted that it is necessary to conduct a series of steps to de-escalate the conflict. It is necessary not only to disarm armed groups, but also to carry out Amnesty of protesters (except serious crimes), to return all the administrative buildings to their owners.

Countries participating in the Geneva meeting recognized that the situation in Ukraine should be resolved by Ukrainians themselves. All their decisions must be mutually acceptable to all inhabitants of Ukraine.

Lavrov said that those who now took the power in Kiev, if they see themselves as representatives of the interests of the people, should reach out to the regions to hear their demands and concerns, start to negotiate with them.

The head of the Russian foreign Ministry drew attention to the fact that in the document adopted at the Geneva meetings, was the immediate start of national dialogue in the context of the reform of the constitutional system. All regions should have the right to speak and contribute their corrections and additions.

Prohibition of entry of citizens of the Russian Federation to Ukraine

Commenting on the official statement of Ukraine about the restrictions on the entry of citizens of the Russian Federation on the territory of Ukraine, Lavrov said that this is outrageous.

Recall that the restrictions will affect citizens of Russia and residents of Crimea and Sevastopol in the age of 16-60 years.

The entry of Russian troops on the territory of Ukraine

Lavrov stressed that no intention to send troops to Ukraine from Russia. Moreover, the foreign Minister noted that such actions are contrary to the fundamental interests of the Russian Federation.

Sergey Lavrov on April 17, said that the Ukrainian military were mobilized illegal order. Mobilization was carried out to suppress protests in the country.

Answering questions of Ukrainian journalists about the alleged increasing concentration of the Russian military in the border areas, Lavrov said that our troops are in its territory, the Ukrainian troops are also being mobilized on its territory. The main difference in the military is that Russian troops will not go against his people, and Ukraine mobilized troops illegal orders to quell the protests.

About the concentration of troops in the Crimea, Lavrov also said that "the residents of Crimea made their choice, Russia this choice is adopted. Increase of troops in the Crimea there. There is a Russian base where there are soldiers and sailors. Their number does not exceed the amount necessary to maintain the normal functioning of the base. If there is some information about the increase in the number of military is only due to the fact that the majority of Ukrainian military personnel serving on the black sea fleet, chose Russian citizenship."

Russian saboteurs and agents on the territory of Ukraine

Commenting on possible questions about Russian spies and agents in the territory of Ukraine, Lavrov said that any agents and saboteurs never were and never will be.

Lavrov explained that in Crimea Russian soldiers were on perfectly legitimate grounds. The troops were brought into high combat readiness when started riots, protests when attempts were made of the Right sector and other thugs to invade the Crimea in order to stage a repeat of the Maidan. However, the intervention of the Russian military was not needed, self-defense forces managed on their own.

As for Ukraine itself, without taking into account the Crimea, Russian servicemen, agents, and saboteurs not there and there is not only celebrated Sergei Lavrov, Vladimir Putin.

Than for Russia will turn the fourth term of Putin

The choice, which is not: why the Russians did not notice the election race

Volodin nominated for the post of the State Duma Speaker