Главная Accident The detection chip of the missing “Boeing”

The long-awaited discovery was made by cleaners of a beach of reunion island in the Indian ocean. They are found off the coast of a fragment of the plane, which with high probability belong to the missing in March 2014 Malaysian airliner. Near the wreckage was discovered a small "suitcase".

Until recently it was impossible to find any clues that could help locate the crash site of the Boeing 777 (flight MH 370), departed on 7 March 2014 from Malaysia to Beijing, China and went missing in the South China sea. On the Board of the airplane were 239 people, but no bodies, no wreckage or black boxes to detect for the whole year was not possible. And now there is hope that you still will be able to unravel this mysterious case.

The wreckage of the plane was discovered by a crew cleaning a beach on the island of reunion. The chip length of about 2 meters. Experts said that it is the trailing edge of an aircraft wing – flaperon. In place immediately went to the French gendarmes and the experts of the Bureau on investigation of air crashes. In addition, Malaysia and Australia have sent to the island of its experts. Professionals will have to figure out how the possible wreckage of the missing plane surfaced thousands of miles from the alleged crash site. Presumably, the wreckage drifted to the shores of Reunion. 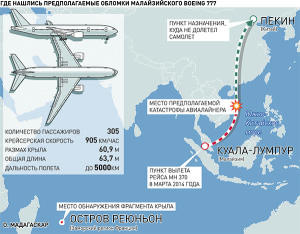 Near the fragment of the wing was discovered closed the small suitcase in very poor condition." It is possible that the suitcase belonged to one of the passengers. "The suitcase was in place before, but nobody paid attention," said johnny Running (an employee of the beach). "Lightning remained attached to the piece of fabric. It's very strange."

However, the management of "Malaysian airlines" urges not to jump to conclusions. Ownership of the wreckage of the missing Boeing 777 has yet to be determined. The Ministry of transport of Malaysia recalled that in the area already falling passenger planes. In 1987 near the island of Mauritius fell to the South African Boeing 747, in June 2009, Komarsky Islands crashed Yemeni A310. However, representatives of "Malaysian airlines" has confirmed that the chip belongs to the Boeing 777.

Most experts interviewed by the American TV channel CNN, are inclined to believe that we are talking about the chip missing Malaysian airliner. However, they also have some doubts. For example, discovered part of the plane is white, while the trailing edge of the wing of the Boeing 777 to be painted in yellow. On the other hand, the flaperon is checked, coincident with the inside of the flaperon on the 777".