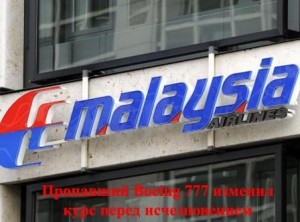 Boeing 777 – 200, which disappeared March 7, from radar, shortly before his disappearance changed course and flew towards the Malacca Strait. It was detected by radars of Malaysia, the BBC, which spotted the plane in the wrong place.

Malaysia press published information that the Boeing 777 flew to the Malacca Strait at a rather low altitude. Press air force commander Malaysia said that immediately after the occurrence of the plane on military radar, with the aircraft ceased all communications, the signals stopped coming.

In search of the aircraft involved 35 aircraft, 42 ships, satellites from different countries of the world. In the search operation involved forces of China, Malaysia, Singapore, USA, Philippines, Indonesia, Vietnam.

The plane disappeared on 7 March 2014 2 hours after departure. Liner followed in Beijing. At the time of disappearance he was about over the South China sea 120 nautical miles off Kota Bharu.

On Board were 227 passengers and 12 crew members. However, with the publication of passenger lists has revealed an interesting detail. Two people checked in on other people's passports. The real owners of the passports (Austrian and Italian) and living a year ago said about the loss of documents in Thailand.

The police later found out that those people that purchased tickets on other people's passports, did it at the same time and in the same place. This detail allowed the authorities to speak on the validity of the version of terrorist attack and hijacking.

Interpol have found that on other people's records flew Iranian citizens. Were published their photos. However, the international police still doubt that these people are involved in the disappearance of the plane.