Главная World News from Kiev: a chronicle of the past cases 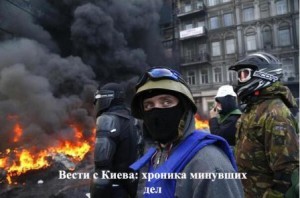 The situation in Kiev is getting more and more heated. The authorities are trying to encourage the rioters to surrender their weapons and release all the captured areas.
18 February 2014 has again escalated the confrontation between law enforcement and members of the opposition. As a result, several people died. Leaders of other Nations called on the government and the opposition to stop violent actions and return to the negotiating table. Germany and the U.S. announced the possibility of sanctions if the situation will continue to escalate.

At 1:47 Moscow time on February 19 2014 in Ternopil (Western Ukraine) protesters set fire to the building of a municipal government of militia.

2:07 the ambassadors of the USA in Ukraine began to warn the citizens of the country, located in Ukraine about the dangers of staying in this country.

2:27 Moscow time it became known about 11 dead from the civilians.

2:45 the number of policemen killed has risen to 7 people.

3:04 of schools and kindergartens declared output

3:35 recorded the attack on a military unit in Moscow. Lviv. 30 soldiers were wounded, five of them were hospitalized.

4:38 GMT recorded the shooting of a traffic police patrol. Two policemen were killed.

4:46 GMT Vitali Klitschko (the leader of the UDAR party) has accused Viktor Yanukovych in an inadequate response to events in Kiev

7:40 Moscow time it became known that the House of trade unions, which was on fire in Independence square, was rescued 41 people.

7:47 GMT pietrobono in Lutsk city police Department. About 200 protesters urged employees of the Department visit their side.

7:51 the President of Ukraine appealed to the opposition to the proposal to return to the negotiating table. On the official website posted a letter from the President, stating that the confrontation is over, and the country should remain in the main task and the main purpose.

9:30 on MSK working group to resolve the crisis in Ukraine made a request to the rioters to surrender their weapons and release all captured buildings and premises. Otherwise, all instigators of disorder "will be severely punished".

10:30 Moscow time it became known about the increase in the number of deaths. This value has already reached 25 people.

10:52 Moscow time it became known about the death of the journalist of the Ukrainian newspaper.

10:58 Moscow time closed the canadian Embassy in Ukraine. Earlier there was information that the Embassy building stormed by unknown armed with sticks.

12:17 Moscow time it became known that at night unknown set fire in Krivoy Rog and Kharkov offices of political parties, the UDAR and "Svoboda". In Lutsk there was an attack on the offices of the Communist party and the Party of regions.

12:57 the protests collapsed the hryvnia and the shares of Ukrainian companies. The dollar in the morning of 19 February 2014 has increased by 1.12% to 8.99 hryvnia.

13:17 Moscow time, law enforcement agencies reported that five employees killed because of the attacks of the members of the mess, armed with traumatic weapons and firearms.

14:04 it was reported that the total number killed by law enforcement officers because of the unrest in Kiev has reached 10 people, 77 injured employee.

14:12 the decree of the President about the announcement February 20 a day of mourning for the dead.

14:40 Moscow time, the protesters occupied the premises of the Transcarpathian regional administration in Uzhgorod. The action was attended by over 1000 people.

14:42 Moscow time, the protesters seized the Lviv administration, announced the creation of their own power.

15:11 Moscow time the police used water cannons to push back the Protestants from Independence square. Demonstrators in response throw the police stones, Molotov cocktails. On the area built barricades. All the smoke from burning tires. There are calls to bring in the clothes area and to support the demonstrators.

15:24 Moscow time the Russian Embassy in Kiev reports that none of the citizens of the Russian Federation in the riots were not injured. At the same time, the Embassy noted that we strongly recommend Russian citizens to visit areas of active conflict.