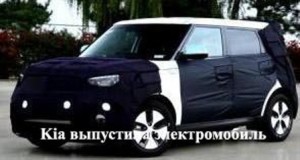 12 of March, 2014. Kia Motors has released, so far only on the local market, a new electric car. Called the Soul EV model.

Local experts and media report that this model has good technical characteristics and can travel quite a distance. Experts Kia reported that tests have revealed that a new electric car can travel on a full charge 148 km up To 100 km / h the vehicle accelerates for 11,2 seconds.

Kia Motors claims that the car was created using all the latest technologies in the field of energy saving. The car itself was created based on the popular Soul hatchback.

In order to charge the battery in this model there are several modes. Fast – charging requires 24 – 33 minutes and a slow charge will take 4.5 hours.

The price of the electric vehicle from Kia is set at 42 million won (approximately $39.4 million). This prestigious level of Executive class cars. At the local market, buyers will pay only half this amount, because the second half will be covered by government subsidies. Owners will also receive a number of tax benefits.

About plans to release an electric car Kia Motors announced at the end of 2013. It was planned to begin selling in the second half of 2014.

Soul EV has become the first fully electric model of the brand for the export market. The body of the electric vehicle is made of a material suited for light products (e.g. bioplastics, synthetic biovilac, biological tissue, etc.). The car is equipped with a special system simulating the sound of the engine in order to protect pedestrians.

In the used car engine produces 81 kW (or 108 HP) with torque of 285 Nm. To store energy in the electric vehicle used Li-polymer batteries. The battery capacity of 27 kWh Kia Soul EV can be recharged from standard household power. The voltage should be at least 220V – charging for long or 100 kW for rapid