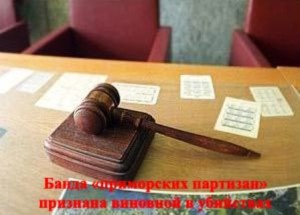 At the meeting it was allowed to attend only one camcorder. Most of the defendants come to a meeting of medical masks, hoods and hats that hide the face.

Recall that the defendants are accused of a series of daring robberies and thefts committed in the spring and summer of 2010 in the Primorsky Territory. Attackers stole valuables and made a series of attacks on the police, killing two of them and wounding several. During the arrest, the accused resisted.