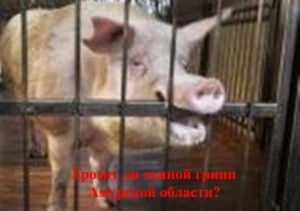 On Tuesday, February 4, 2014 the administration of the Oktyabrsky district of the city of Blagoveshchensk has confirmed the information about the woman's death from swine flu.

In October regional hospital the woman asked not srazu.V five days she was treated independently, without recourse to medical institutions.

Recall that from the beginning of this year, in the Amur region recorded four cases of the virus H1N109.

The facility is now in quarantine. We study the circle of people with whom the patient had contact. All identified persons examined for the presence they have the disease. Specialists Rospotrebnadzor reported that all ill with swine flu people - adults and they have not been vaccinated. The status of these people is assessed as moderate.

The last outbreak of swine flu has been registered in the Amur region in 2009. Then ill about 100 people, 9 of them died. At the same time, doctors reported that only three of them died due to swine flu, the rest died due to complications that this disease has caused them. But this year, experts claim that this will not happen again, because recover from the 2009 received immunity from the disease, a third of the Amur region pref. In 2009, not a single resident has not been vaccinated, because in the world and the country's first vaccine appeared only in the summer 2009go. The rest of the citizens, doctors strongly advised to take anti-viral drugs.