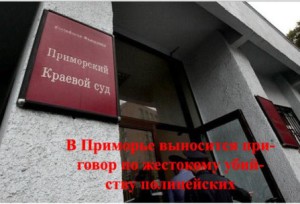 On Tuesday, February 4, 2014 in the Primorsky regional court began to sentence a gang of young people so-called "maritime guerrillas" who are accused of a series of robberies, thefts, ubiystvepolitseyskih committed in the spring and summer of 2010. These individuals were indicted on 23 counts.

January 29, 2014 the jury received a list of 225 questions, which concerned charges. In the evening, 03 February, the jury was ready to reach a verdict, but the judge has found some discrepancies in the answers to a few questions, and asked the jury to correct their responses to the verdict sounded clearly. Corrections jury had to make before Tuesday. On Tuesday, the jury presented the verdict, but the judge found the inaccuracy in the 11th issue, the jury again retired to deliberate. After the meeting, the verdict has been re-presented to the judge.

After verification of the verdict, the judge found no errors in the text and the chairman of the jury was able to proceed with the reading of the sentence. In the dock six people (four of them came to the meeting in a medical mask): Vadim Kovtun, Alexander Kovtun Maxim Kirillov, Roman Savchenko, Alexei Nikitin, Vladimir Ilyutikov. The most serious charges leveled against Kovtun. He appears in all the episodes, and he is considered the organizer of the gang. The four defendants have pleaded guilty to minor criminal episodes, two (Kovtun and Nikitin) completely deny his guilt. All defendants shift the blame to their fallen comrades. If the jury found the defendants guilty, will be scheduled another meeting to determine sentences.

Recall of the aspects of the case. In the spring of 2010 settlements of Primorye Territory, a wave of robberies and audacious theft. Attackers stole valuable things: money, cars. Also, there were a series of attacks on law enforcement agencies, were killed while two policemen and several wounded. Gang searched throughout the Maritime Provinces. During the arrest the gang members resisted, two members - committed suicide.

In a verdict it will take about 4-5 hours. Follow us and you will always be up to date.