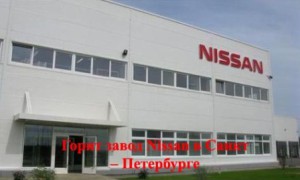 13 February 2014 there was a fire at the factory Nissan in St. Petersburg. The fire was given the increased level of complexity due to the threat of the spread of fire.
According to preliminary data GU the Ministry of emergency situations lit room, attached to the stamping shop. Firefighters responded to the incident in a timely manner. Arrived to the place in the shortest possible time. To the place of fire arrived 11 vehicles, 49 personnel of the Ministry.

All circumstances of incident are still being determined. It is reported that the call at the remote duty entered at 15:01, for 9 minutes at the place were the first fire team. The fire was rated number 1 BIS.

Nissan plant in St. Petersburg that positions itself as the best in the world. In 2012 he was awarded as the best plant of Nissan in quality of products. In St. Petersburg plant opened in 2009 in the industrial zone "Kamenka". It was built by Japanese specialists. Recall that the plant is located at: Kamenka district, Pargolovo, Avenue Commandant, D. 140.

The plant is still relatively young and gaining power. Total investment in this plant amounted to about $200 million.